How NOT To Load Your ATV | ATV Fails If you own an ATV or UTV, you might be able to sympathize with these examples of how not to load your ATV or UTV. Hopefully, you can learn from their mistakes and avoid them yourself.

Stuck In A Rut

The driver is lucky he didn’t get a head injury! Many things go wrong in this video that clearly shows how to not load your ATV. These guys thought the giant rut full of water wouldn’t be a problem when trying to get their ATV lined up with the ramps. At one point, they move the ramps, and the ATV almost falls off completely. Finally, one of them jumps on while the other lifts the ATV’s back wheels out of the rut, and it takes off into the truck bed, with the driver almost getting clotheslined.

This video is a perfect example of how traditional ramps can fail you and how NOT to load your ATV. These guys are all pointing fingers trying to blame who did it, but let’s just go ahead and blame it on these cheap ramps. As the video starts, you can see that the ATV’s back wheels slipped off the ramps, and they struggle to get it to go forward or backward. They end up pulling the ATV backward off the ramp and it slams to the ground as they narrowly avoid damaging their truck bed.

For some reason, this father/son hunting duo thought it would be a good idea to load their moose in the bed of the truck, put plywood on top of it, and then drive their ATV onto the plywood. Before the dad even drives onto the ramp, the son realizes he forgot to attach the ramp to the truck bed properly but luckily fixes it right before the dad drives up. That’s not the worst that happens. The dad “gets a run at it” and plows right into the back glass of the truck, shattering it. Based on their reactions, I think they saw that coming.

Spoiler alert: somehow, these guys make their ATV do a flip out of the truck bed, and no one seems injured. This ATV fail starts out all wrong as you see that the ATV ramp is crooked and about to slip out from under the quad. One guy is pushing and lifting the ATV from the ground while the other is on it and must be gassing it hard. Suddenly, the ramps fall away and the ATV does a backflip, crashing down upside-down into the truck bed and bouncing out. Wow, that is not even close to how you load an ATV.

In this compilation of ATV loading fails, most of these people aren’t even using ramps! Some have substituted real ramps for 2x4s or make attempts to drive it into the truck bed with nothing at all. The majority of these ATV loading fails end in the driver falling backwards off the ramp, nearly being crushed by their quads or severely damaging their truck. We can all do better than these ATV fails.

As the video starts, you might assume things will go wrong because the guy decided not to use any ramps and load his ATV onto a trailer that isn’t hooked onto a vehicle. It’s kind of a see-saw situation. He ends up driving the ATV over the front of the trailer. Wonder how he gets it off..

Now that we have witnessed how not to load your ATV, what have we learned? Sometimes it’s just plain stupidity, but often a major contributor to ATV loading fails is due to people using traditional loading ramps or makeshift ramps. There is a better way to load your ATV. MAD-RAMPS Pivoting Ramp System is the superior alternative for loading your ATV, UTV, golf cart, or snowmobile. There is no risk of the ramps sliding out from under you and you are left with more room in the bed of your truck for gear (maybe even a moose). Learn more about MAD-RAMPS by visiting our website.

Get Rid of Your ATV Ramp

The Ultimate Guide to Hauling Your ATV 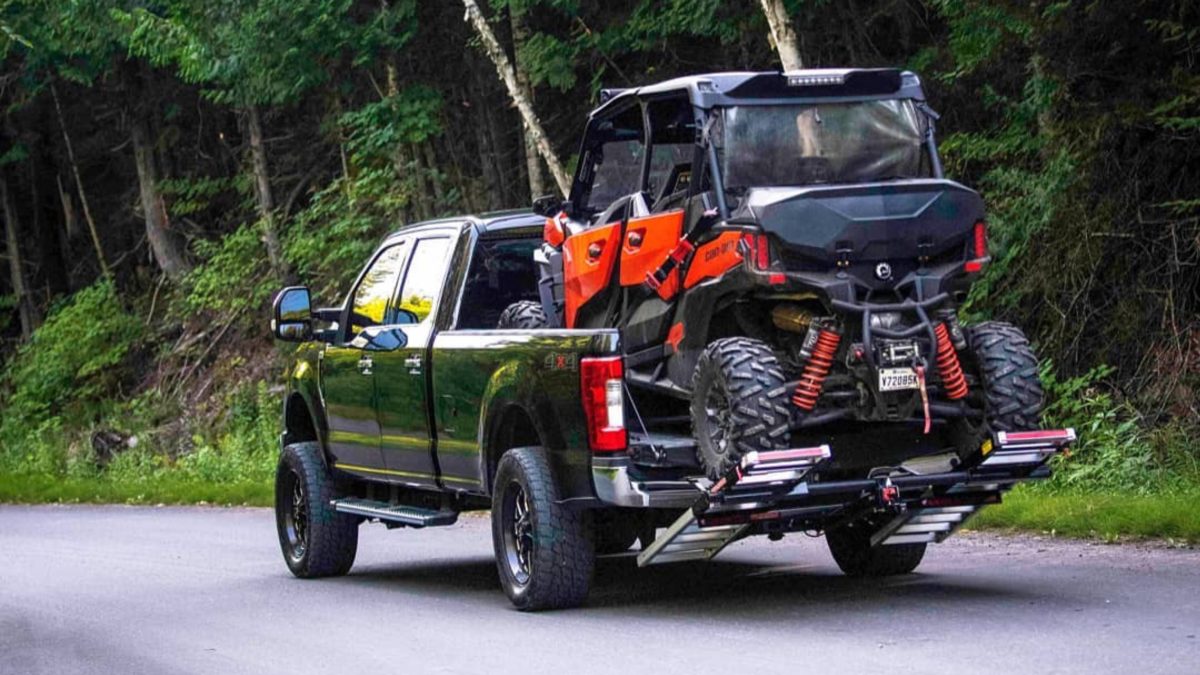 Will Mad-Ramps work with my ATV/UTV and truck?

The most common question we are asked is will Mad-Ramps work with my ATV/UTV and truck?  In order to answer that question, you need to.

Rip and ride on one of the hottest ATVs of 2019. Which one are you about to take out to the trails this season? Yamaha.

One of the biggest obstacles in hauling your ATV/UTV is ensuring that it meets state and federal regulations. Do you need extra insurance? What about.