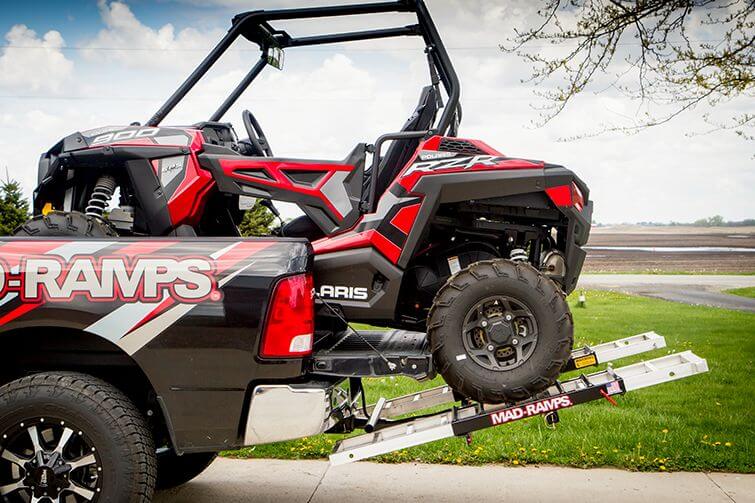 This professional snowmobiler, Levi LaValle, starts off by saying he thought this was going to be a good idea (when someone says that, it usually isn’t). He concocted this scheme while trying to figure out how to take his snowmobile with him into downtown Minneapolis. It was definitely not a good idea. Luckily he has his “stunt double” Lonnie take over when he tries to jump his snowmobile over his truck.

A group of friends out in the mountains who seem prepared to load up their snowmobile struggle to drive their snowmobile up the steep ramp into the back of the truck. At one point, about 4 minutes in, the driver almost gets his face busted in by the ramp when it comes loose. It just goes to show that even people with plenty of experience can discover how not to load a snowmobile when using inferior loading ramps.

In the beginning of the video, you can see how incredibly steep the ramp is that leads up to the truck. The cameraman tells his buddy who is driving that it should “walk right up,” but with a ramp that steep, the driver had to lay into the throttle harder and ends up smashing the top of the truck cab. Yikes!

“I Guess You’re Not Riding Tomorrow”

Yep, there is no way the guy in this video will be riding tomorrow. He takes a good run at the sled ramp and manages to slam right into the bottom of the ramp and damage his snowmobile pretty badly. In the process, he also seems to have got a good gut punch from the handlebars. Better luck next time.

Ramps Made Of Snow

In this video, its not clear at first how this driver will get the snowmobile into the truck bed since there is a pile of snow much taller than the truck blocking the path. But then, from around the corner, we see the driver fly up on top of this mountain of snow. Let’s just say, he doesn’t make it into the truck bed and shows us exactly how not to load your snowmobile.

Avoid a Snowmobile Fail with MAD-RAMPS

If these videos made you cringe, you probably wonder what the best way is to load your snowmobile. MAD-RAMPS offers the safest, easiest, and most convenient way to load your snowmobile directly into the bed of your truck without an epic fail. Traditional ramps are dangerous and a trailer is just not practical. The MAD-RAMPS Snowmobile Kit is an add-on to the MAD-RAMPS Pivoting Ramp System that adds a third central ramp and an adjustable pedestal for the snowmobile track, as well as custom plastic inserts for the outer ski ramps. The MAD-RAMPS Snowmobile Kit is the new standard for sled transportation. Order yours on our website today and don’t risk ending up like these epic snowmobile fails.

Best Places to Ride Snowmobiles in the U.S. The best snowmobile gear is intended to protect the rider while allowing as much mobility as possible for high-speed, action-packed riding. When you're outdoors creating. Snowmobiles, whether driven professionally or recreationally, can be a lot of fun and provide great entertainment. Snowmobiling is a highly popular winter sport, and the. Using your snowmobile to slice through the snow is an exhilarating and enjoyable winter activity that shouldn't be diminished by the bother of loading and.